In this essay I call critical attention to the role of physical location in rhetorical situations, naming this aspect of communication “rhetorical space.”; Rhetorical space is the geography of a communicative event, and, like all landscapes, may include both the cultural and material arrangement, whether intended or fortuitous, of a location. Drawing on the observations of novelists, philosophers, anthropologists, cultural geographers, and architectural historians, I explore the dimensions of this concept through an investigation of the pulpit, a rhetorical space that communicates a message to the audience quite apart from the sermon.

via Taylor and Francis Online http://bit.ly/16cDeZN 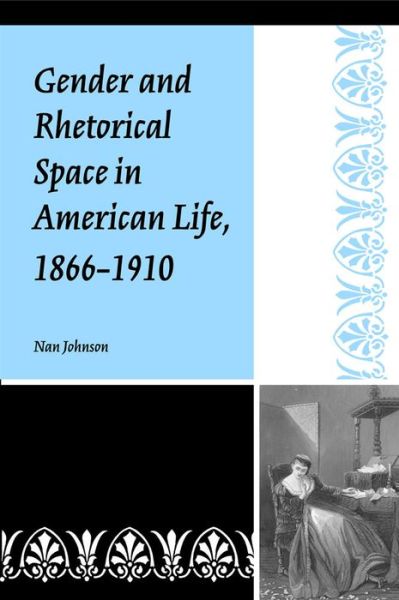 Nan Johnson demonstrates that after the Civil War, nonacademic or “parlor” traditions of rhetorical performance helped to sustain the icon of the white middle class woman as queen of her domestic sphere by promoting a code of rhetorical behavior for women that required the performance of conventional femininity. Through a lucid examination of the boundaries of that gendered rhetorical space—and the debate about who should occupy that space—Johnson explores the codes governing and challenging the American woman’s proper rhetorical sphere in the postbellum years.

While men were learning to preach, practice law, and set political policies, women were reading elocution manuals, letter-writing handbooks, and other conduct literature. These texts reinforced the conservative message that women’s words mattered, but mattered mostly in the home. Postbellum pedagogical materials were designed to educate Americans in rhetorical skills, but they also persistently directed the American woman to the domestic sphere as her proper rhetorical space. Even though these materials appeared to urge the white middle class women to become effective speakers and writers, convention dictated that a woman’s place was at the hearthside where her rhetorical talents were to be used in counseling and instructing as a mother and wife.

Aided by twenty-one illustrations, Johnson has meticulously compiled materials from historical texts no longer readily available to the general public and, in so doing, has illuminated this intersection of rhetoric and feminism in the nineteenth century. The rhetorical pedagogies designed for a postbellum popular audience represent the cultural sites where a rethinking of women’s roles becomes open controversy about how to value their words. Johnson argues this era of uneasiness about shifting gender roles and the icon of the “quiet woman” must be considered as evidence of the need for a more complete revaluing of women’s space in historical discourse. via Barnes and Noble